A little cellphone photo tour of a detour down High Marsh Road on my return from New Brunswick last weekend.

Those transmission lines are visible below across a wet spring dykeland, heading toward the Sprott wind farm near Amherst, just visible on the horizon.

Looking back toward Sackville, past haybales on dykeland, we can see a new piece of utilitarian infrastructure, the 14-storey berry freezer that I hear is locally called ‘the cube’.

Finally leaving High Marsh Road and climbing up to Point de Bute there is an amazing look-off down toward dykelands and an old hay barn, one of many that once dotted this landscape when horsepower was king.

The Tantramar/Chignecto landscape is clearly a practical, working landscape, where new uses are layered when needed. But it is also a beautiful one.

Sea squirts, on the move

Today, I was exploring the eBook version of Fred Shapiro’s (2006) The Yale Book of Quotations (Yale University Press), trying to verify that oft-used William Gibson quote, “the future is already here – it’s just not very evenly distributed”. A sleuth blogger, Quote Investigator, indicated it was poorly documented and so it seems to be.  But it was not entirely wasted time. While I was in there, I found this delightful quote, by Daniel Dennett, U.S. philosopher (1942– ), which gave me a big laugh on this grey day:

The juvenile sea squirt wanders through the sea searching for a suitable rock or hunk of coral to cling to and make its home for life. For this task, it has a rudimentary nervous system. When it finds its spot and takes root, it doesn’t need its brain anymore so it eats it! (It’s rather like getting tenure.)

Sometimes I do feel like a sea squirt, but it is also worth noting that sometimes our ‘spots’ do change on us. Every academic home I’ve ever had has either disappeared or been amalgamated in some way during my time. Charles Sturt University’s School of IT and School of Science and Technology (from my days as a spatial scientist) are no more, each collapsed into other multi-campus schools, and ANU’s beloved CRES (Centre for Resource and Environmental Studies) amalgamated with another unit and became the Fenner School of Environment and Society as I transitioned from PhD to postdoc. There are always debates over where such interdisciplinary environmental or geography units ‘fit’ in the university, and that conversation has been ongoing at Dalhousie, too. SRES, where I am now, is about to be picked up and moved to another faculty, like when my son moves rocks on the seashore that have creatures in residence. Hopefully we don’t get left high and dry.

The Amherst wind farm emerges from a blizzard as my train carriage whips past, April 2022.

Interesting to see new resistance emerging to wind energy in NS, using disappointingly familiar language. For instance, in Inverness County last week, to paraphrase, we’re not opposed to wind energy, of course, but this is the wrong place for it. A few weeks ago I submitted a letter to a process that was underway in the Municipality of Cumberland to review their wind turbine regulations, as a result of conflict over the proposed Higgins Mountain wind project. I drew on research by MES students Ellen Chappell and Mehrnoosh Mohammadi in that letter (it is included as Appendix C, p. 46-47,  in Plan Cumberland’s Public Engagement report of their review).  Ellen’s thesis work showed that wind energy support is quite strong in the Amherst area, even among those who can see wind turbines currently. Mehrnoosh’s work on renewable energy in amenity landscapes like vineyards showed that visitors accept that landscapes are for more than just the reason they are visiting. In fact, if vineyards brag about their energy infrastructure, it is possible that visitors will see it as an asset. Resistance threatens the next phase of Nova Scotia’s energy transition, and is characteristic of climax thinking: erroneously believing that our landscapes are in a final and stable state. A few highlights to my letter to Plan Cumberland follow:

I believe it is important to transition to what is often called a ‘multifunctional’ landscape norm, where we allow for a layering of energy into other land uses. In Canada we have not had to do much of this yet thanks to our large area, but others have. In NS we must learn how to as our population grows and electrification proceeds to reduce carbon emissions. Evidence from some national survey work I have collaborated on (also attached) suggests it is good for us to be exposed to the energy sources on which we depend. This strengthens our support for renewable modes, and may in fact inspire decisions to conserve energy, which I’ll talk more about next. The truth is that energy has a footprint—and deserves a footprint—in our lives. Hiding that footprint only makes us less likely to understand our dependency and its costs. …

… When it came to trying to predict people’s willingness to have wind energy in view of their home the two strongest predictors were agreement to the following two statements:
• Seeing wind turbines from my home reminds me that electricity I use has to be generated somewhere.
• Energy is just a commodity; if we can develop it to sell elsewhere (e.g. New England), then we should.
… those who agreed to both statements have made a shift in their thinking: putting energy alongside other regional commodities as viable for export beyond local needs (as they do in more established energy-producing regions and potentially enabling a more resilient regional grid), while taking responsibility for bearing the costs of their own energy consumption too. …

Survey responses speak to the importance of being willing to tackle new challenges and seize new opportunities rather than hide from them by trying to hold landscapes as they are—particularly those designed for needs other than the ones we face today—or otherwise trying to exclude energy from ideas of what our landscape is ‘for’. 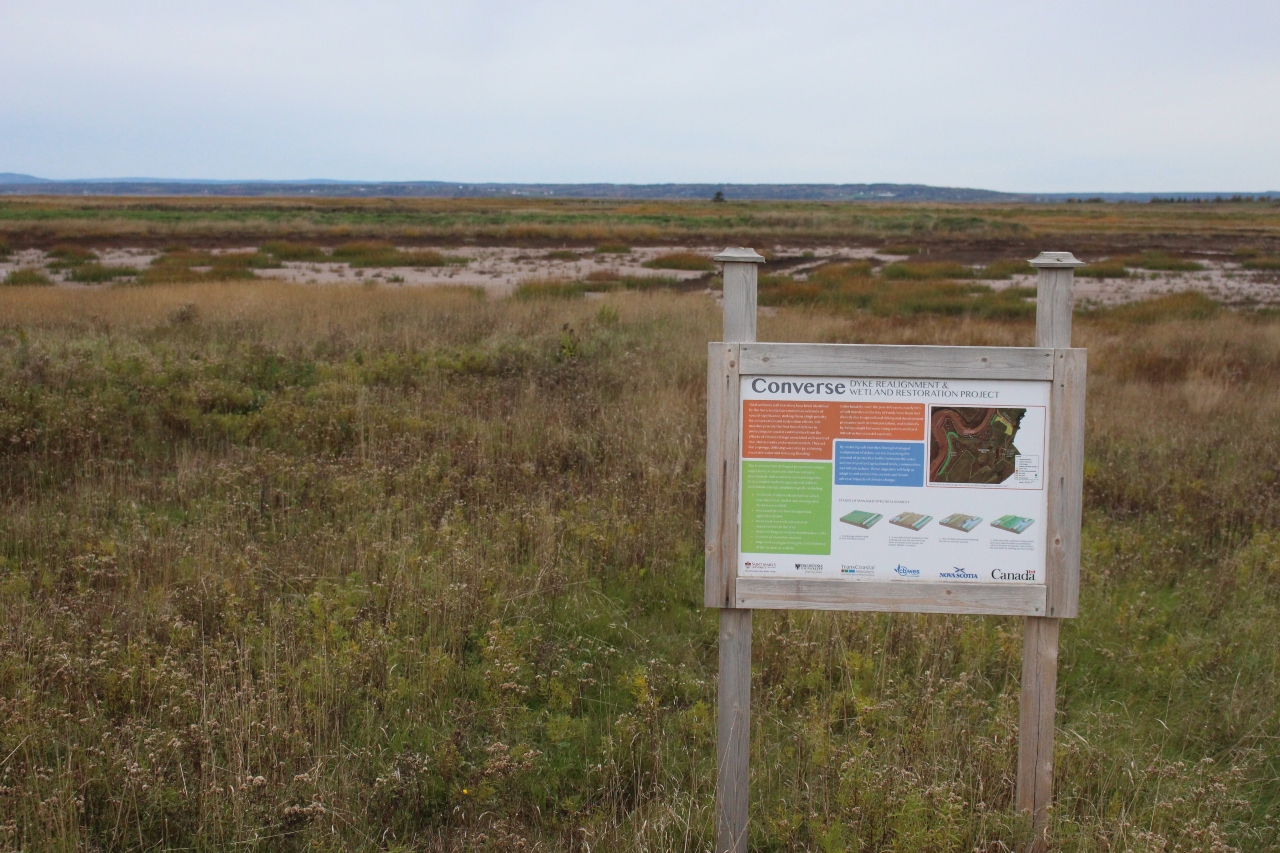 The story features this picture of TransCoastal’s dyke realignment project (and signage) at Converse near Aulac on the Chignecto Isthmus joining NS to NB.

CBC’s Moira Donovan has written an article for the National Observer about the new report on the future protection of the Chignecto Isthmus. When it came out there was some consternation in the TransCoastal Adaptations team that nature-based solutions like dyke realignment and tidal wetland restoration weren’t built into the solution. There is at least 15 years of local research on the value of such approaches, and a great time series of dyke realignments to learn more from, but consulting engineers clearly aren’t leveraging it yet. The report options seem designed instead to prioritize agricultural land values and thus ‘hold the line’ with higher and stronger walls. Not even the NS Department of Agriculture that manages the dyke system on this side of the Bay has the ethos that all current dykelands can be maintained in the face of climate change.  NSERC ResNet is looking to understand the tradeoffs involved in these and other dykeland decisions, including complex dynamics such as carbon tradeoffs, salt water intrusion, and cultural implications across a range of constituencies.