Urban stasis … what about rural?

Halifax is a mess. I’m not kidding. For those of us who have cars and kids in summer camps all over the place, instead of its usual peaceful summer self, Halifax is detour central. Downtown is under construction, with towers pushing out of heritage skins, and two of the five roads leading into the dreaded Armdale Rotary are closed for various reasons. This is relatively new. For years, nothing could be built downtown, it seemed, because of the need to protect views to the 18th century defensive citadel at the heart of the city. While the volume of work simultaneously underway is inconvenient, it is like a wildfire spreading after decades or centuries of fire suppression. This is Yellowstone, circa 1988.   Liebskind is right (see photo). The citadel is not what Halifax is about anymore.  It doesn’t meet new needs for urban densification, for instance. (It also bears mentioning, it never did meet needs; the Citadel was never attacked.)

But why stop at cities? Why is it that busses line up on cruise ship days to take thousands of visitors  to Peggy’s Cove? Peggy’s Cove is a simulacra of an 18th century coastal Nova Scotia fishing village, with its Peggy’s Point Lighthouse sitting atop massive granite outcrops arguably the most photographed place in the region. Rather than relying on fishing, this place and others like it now rely on tourism that commemorates a Golden Age idea of ‘Maritimicity’ (coined by eminent Canadian historian Ian McKay in 1988). We might need rural places for new things, like renewable energy, but if we’re not careful, the ‘tourism state’ will deny such alternate visions.

Congratulations to Denise Blake for her paper, out today in Ocean and Coastal Management, Participatory mapping to elicit cultural coastal values for Marine Spatial Planning in a remote archipelago (free for 50 days). The paper is based on map-elicited cultural values mapping of the Falkland Islands coasts. This work was undertaken to inform the Marine Spatial Planning process underway in the Falklands, led by Amelie Auge, I really enjoyed advising on this project. The geographical and connectivity issues in the Falklands made a more typical web-based PPGIS (public participation GIS) process impossible, and so it called for careful design to elicit values from citizens.  The analysis revealed particular hotspots of local value, but also that people were not particularly attached to areas near them.

Thanks to Mike for sending me this wonderfully apt comic, by xkcd.

After an almost completely publication-free sabbatical year, it is nice to have two papers come out in the same day.  Both of these emerged from our Energy Transitions in Canada project. One is empirical, reporting on Yan Chen’s mapping of a year of Instagram images from the footprints of two hydroelectric projects.  The resulting paper, Using geo-tagged Instagram posts to reveal landscape values around current and proposed hydroelectric dams and their reservoirs, came out today in Landscape and Urban Planning.  Congratulations to Yan for her first lead authorship! As sometimes happens in the asynchronous world of publishing, papers that are building on Yan’s work have come out slightly before or at the same time. The one that same out today is Digital archives, big data and image-based culturomics for social impact assessment: Opportunities and challenges (free for 50 days), in Environmental Impact Assessment Review.  This is the one you should read if you want to know: why the comic? 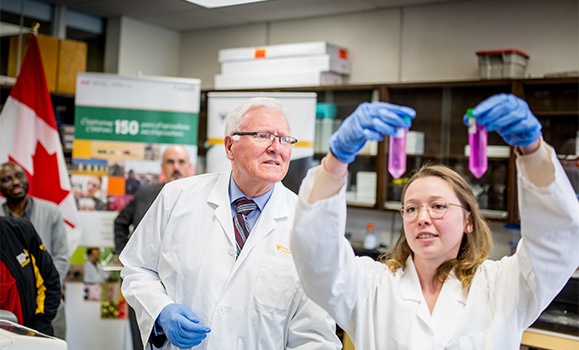 Carolyn won’t be wielding any test tubes with us.

Great to have Carolyn Mann joining our sustainable grazing team, working remotely from Ottawa. Carolyn is finishing up her Masters at Dalhousie’s Agricultural Campus in parallel with this part time research contract. Her Masters sees her combining soil testing with farmer interviews about soil quality. She won’t be wielding any test tubes in her work with me, however. Carolyn will be launching the third stream of our Reconciling HM SSHRC project: talking to HM trainers to understand whether HM farmers are born, or made.  Welcome aboard.

Wood Turtle Strides has collaborated (again) with the clever people at Wonderlust Media to develop a video for farmers explaining the biology of wood turtles, a species at risk in Nova Scotia, and how to protect them. This is the third video in our extension series. The first two were about modified harvest, and riparian management. All three can be found at the YouTube channel for the Biodiversity Landowners Guide, our extension website.  Simon Greenland-Smith has been busy this summer signing up farmers that host critical wood turtle habitat in the incentive-based Strides program. Participating farmers get financial compensation for the management changes they undertake on that habitat  to help protect the species. Wood Turtle Strides is a partnership with NSFA and Environment and Climate Change Canada.