Yan Chen defended her innovative SSHRC- and NSGS-funded MES thesis masterfully on Friday. She gleaned youth landscape values from a year’s worth of Instagram images from a 5-km radius of the actual and proposed headponds, respectively, of the Mactaquac and Site C dams. Being the first defense since a large new class of MES students started in the fall, the room was packed with supporters. Committee member John Parkins skyped in from the University of Alberta, and Faculty of Management colleague Jennifer Grek-Martin examined the thesis, which included wide-ranging discussions on landscape, sense of place, aesthetics, digitalism (our new religion as described by Yuval Harari), and virtual/augmented reality. It was everything you hope a defense can be: Yan spoke strongly in support of her work, and creatively about its potential implications and improvements. I look forward to getting her papers out in the literature, and building on it with a SSHRC Insight Grant that went in on Monday, led by colleague and expert in making Big Data matter, Mike Smit. 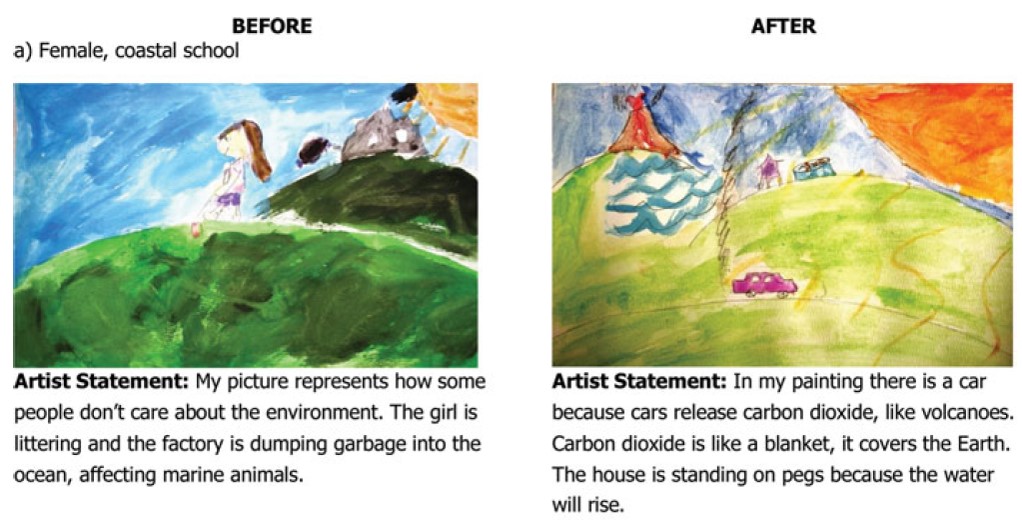 Sample artwork from one NS south shore grade 4 student, before and after a 7-lesson climate change module.

I was pleased to be invited last week to present remotely to a workshop in Vancouver run by Dr. Stephen Sheppard’s lab, Collaborative for Advanced Landscape Planning (CALP). He and his team have – among other things – developed the Future Delta 2.0 computer game for use exploring climate change challenges and solutions for the British Columbia lower mainland. Thanks to SSHRC connection grant funding they brought researchers, youth, government and teachers together to workshop the tool and its application, and discuss broader issues of climate change education. Branded a ‘Cool Tools‘ event, I contributed my low-tech work with MREM Jillian Baker and Jason Loxton using art in schools to teach and evaluate climate change modules. I was reminded of the lack of success we had getting our modules through the Department of Education and into teacher’s hands, perhaps because at the time there were only two learning outcomes in the entire NS curriculum that directly related to climate change. I hope things have changed now, five years later.

I am just back from Evora, Portugal, for the first World Congress on Silvo-Pastoral Systems. On the basis of my spatial background and postdoc work on scattered tree grazing systems in Australia I co-convened with Argentinian Guillermo Martinez Pastur working group 1 on mapping and assessing large-scale trends. But I myself presented in working group 14 on integrative approaches, synthesizing bibliometric and rhetoric work with Carlisle Kent last year on my new grant on holistic grazing management to outline three reasons for polarization on HM and five ways to avoid it. The conference was diverse and extremely worthwhile, showing the value of problem- or landscape-focused conferences over disciplinary ones. I enjoyed connecting to young and established scholars of cultural ecosystem services, integrative research, and landscape analysis. Paired keynotes by Guy Beaufoy (about EU policy interactions) and Ika Darnhofer (on farmer adoption) were particularly rich in insight. 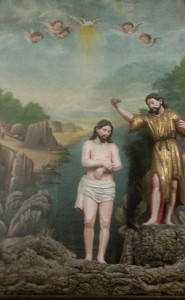 Jesus rests on a cork earth in a diorama at the Igreja de São Francisco.

A surprise pleasure was a day spent visiting pastoral/Montado grazing properties, riding the bus alongside Lynn Huntsinger, co-author of the 2014 critical commentary on my post-doctoral work that inspired my new grant on HM. Interesting combinations of livestock (cattle, pigs, sheep) and trees (cork, pine nut) were explored on the farms we visited. Later I saw signs of the importance of cork for this culture: cork used as a symbol of earth itself (right).

The UNESCO-listed host community of Evora is a fascinating place, and while we had little time amidst the events to explore, I managed to take in the Capela dos Ossos (bone chapel) during a quick trip to the Pharmacy for something to ease my now-characteristic if tiresome conference cold symptoms. I very much regret not making it to the Fórum Eugénio de Almeida, which:

…is a space designed for the promotion of artistic and cultural actions guided by social responsibility and sustainable practices, committed to a multidisciplinary, instructive and inclusive programme…

I was intrigued by the museum’s exterior, which sported a huge vertical banner reading “What’s Past is Prologue”, as well as writing along the fence at the rear saying “Everything is a Story”. Both were poignant, sitting next to ruins of a first-century Roman temple, along with more recent (but still old) water tower, cathedral, convent, and palace. It feels like a place that has found a way to layer history without much sacrifice of past or future. 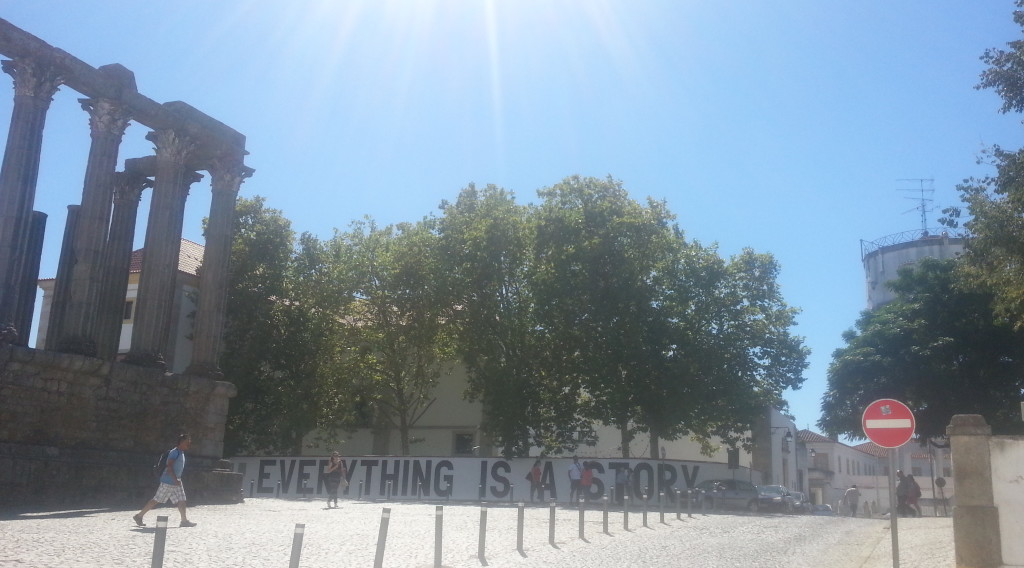 A fence is blazoned with Everything is a Story, bookended by a Roman temple and a water tower.

The 16th century University of Évora itself was a luxurious space to spend extended time, with marble arches and floors, half-tiled walls and many, many tiny cups of coffee. We were there during a period of extensive hazing of first years by upperclassmen and women, the latter wearing full black suits and capes (unthinkable in the heat). Their classrooms are a tourist attraction, as well as a conference location, which must be strange for them. I snuck into the 18th century Geografia room, which had an impressive raised pedestal for the professor and tiled murals representing the elements, the seasons and the continents (see America, below). 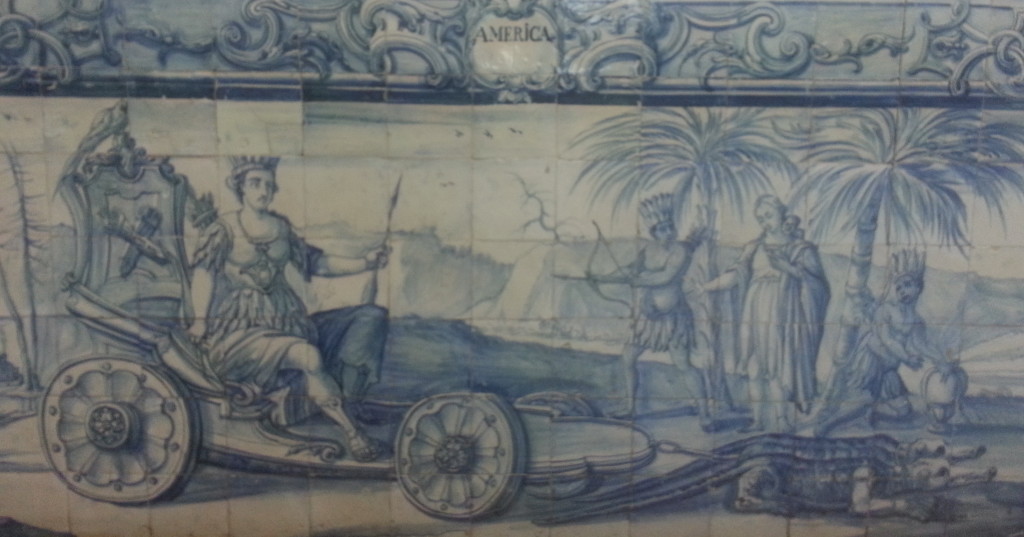 I would have liked to be in this American Geography class.