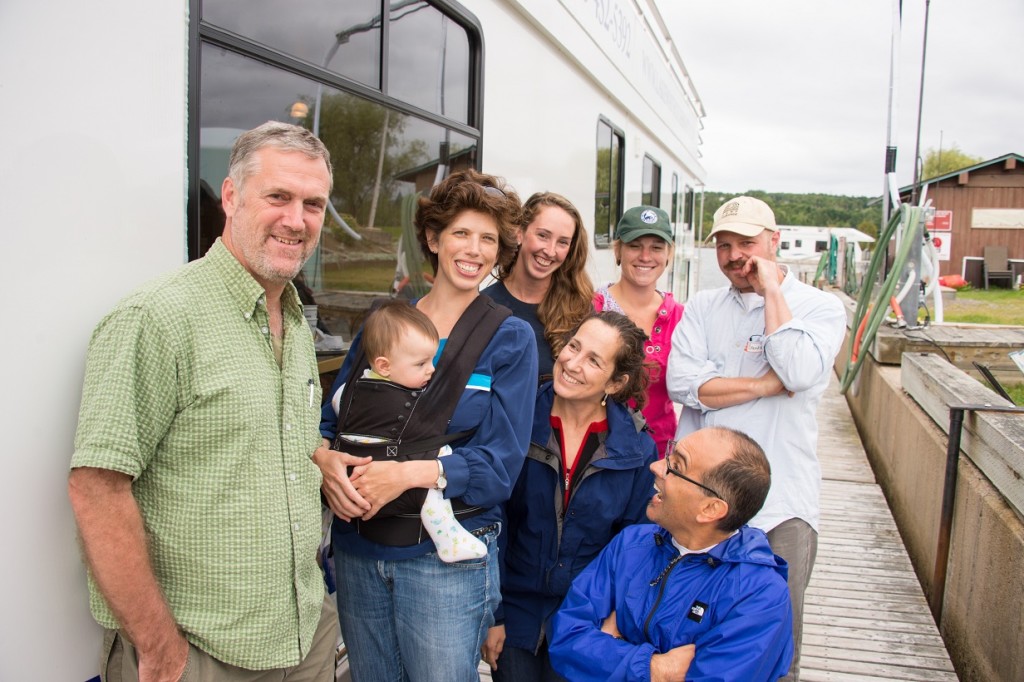 Back in August 2013, we ran three houseboat tours of the Mactaquac headpond, to elicit locals’ perspectives on the landscape and what they would like to see for its future. A paper about that work, Learning (or living) to love the landscapes of hydroelectricity in Canada: Eliciting local perspectives on the Mactaquac Dam via headpond boat tours, is now out in Energy Research and Social Science (free for 50 days at this link). This was a novel research approach that presented undeniable technical challenges, but generated rich stories of the place and their connection to it, some of which were produced into a short documentary, Mactaquac Revisited.

Despite the trauma that accompanied the construction of the dam in the late 1960s, the local population has demonstrably adapted and come to cherish the new landscape: the need to rebuild the dam, with power or not, was almost unanimously expressed in the focus group elements. In the landscape elicitation, however, done alone or in smaller groups, many people expressed a nostalgia for the old river, and even occasionally an openness to seeing it returned to that state. In fact, it was the misinformation and fear we heard on the boats about what the removal option entailed that inspired our storymap, Before the Mactaquac Dam. This paper shows (again) the adaptability of people to drastic landscape change such as caused by hydroelectricity, where some amenity can be found. The implications of this for proponents of hydroelectricity (and other large-scale energy) schemes is more fraught: “You’ll get used to it” is clearly an inadequate response to stakeholder concerns, yet clearly it is sometimes true. 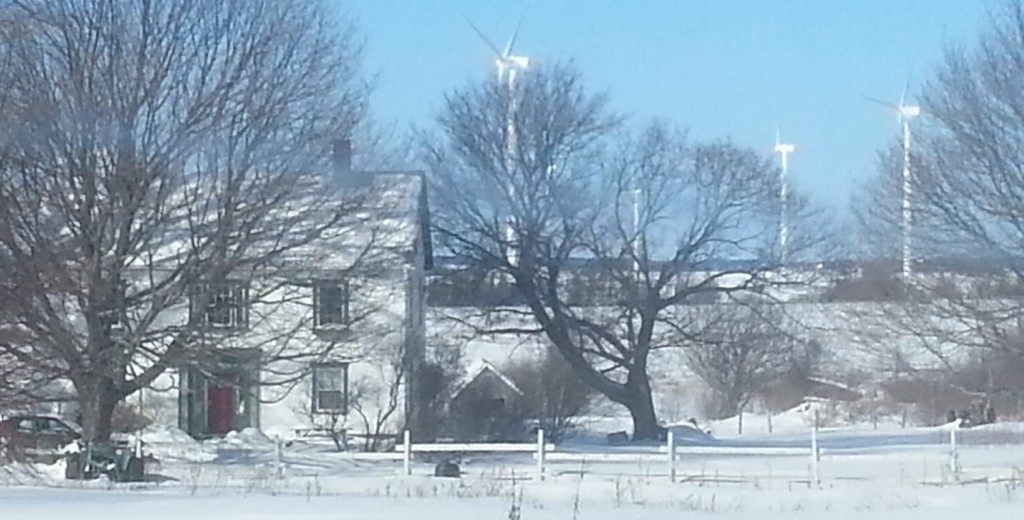 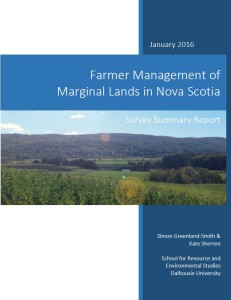 After two snow days here in Halifax, Simon Greenland-Smith was off to Truro last Wednesday to present the results of our Marginal Land survey (final report now available) to the Council of Leaders of the Nova Scotia Federation of Agriculture (NSFA). The NSFA is our partner on the Species at Risk Partnerships on Agricultural Land (SARPAL) project funded by Environment and Climate Change Canada. The Council of Leaders includes the NSFA executive as well as regional and commodity representatives from across the province. They were interested in the research findings, particularly evidence that Nova Scotia farmers have a strong stewardship ethic. 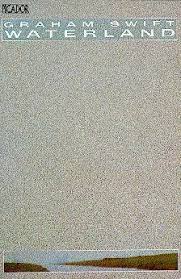 The cover of my copy of Waterland, picked up by someone who knows me well at a secondhand book sale.

I recently re-read Waterland, by Graham Swift, which won the Booker Prize in 1983. It’s a remarkable combination of fenland geography, biographical mythology, environmental/industrial history, and thriller. I think you may need to be into wetlands to get through some of his passages, and certainly be comfortable with a fragmented temporal axis, but it is my kind of storytelling. It is funny – there’s this wonderful bit where he discusses how flat landscapes like the fenlands encourage lustiness – and the main characters are solid. As with much of what I record here, I also see parallels between my recreational reading and my research. This is a book about place, cultural landscapes, and adaptation. In the wake of my more recent research on dykelands, for instance, a late passage seemed particularly interesting upon this second read:

There’s this thing called progress. But it doesn’t progress. It doesn’t go anywhere. Because as progress progresses the world can slip away. It’s progress if you can stop the world slipping away. My humble model for progress is the reclamation of land. Which is repeatedly, never-endingly retrieving what is lost. A dogged and vigilant business. A dull yet valuable business. A hard, inglorious business. But you shouldn’t go mistaking the reclamation of land for the building of empires. (p. 291) 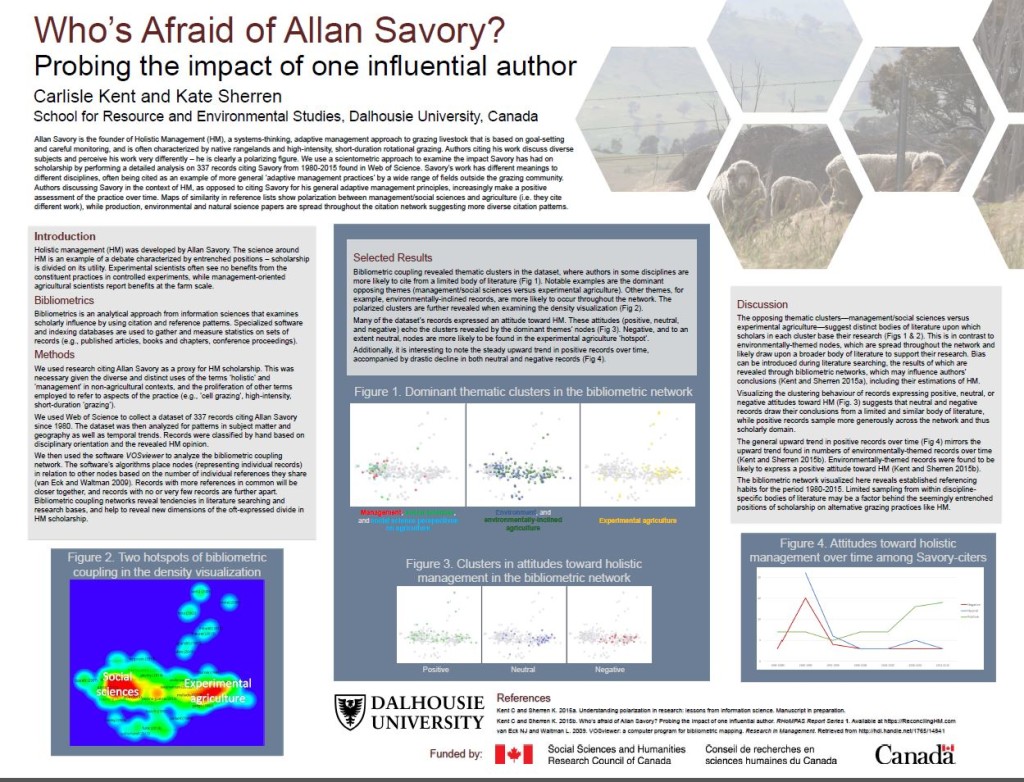 Who’s Afraid of Allan Savory? A poster summarizing the first report from RHoMPAS

I am disappointed not to have been able to make the trip to Corpus Christi, Texas, today as planned for the Society for Range Management annual meeting (and not just because it’s February in Canada). I was asked to present a talk on the value of qualitative social science methods for grazing research, in a session designed to develop common ground around adaptive grazing practices such as Holistic Management (HM). Carlisle and I also submitted a poster (above) based on our bibliometric analysis of the HM literature (as approximated by looking at papers that cite Allan Savory). I wrote the Savory Institute to give Mr Savory a heads up, given the cheeky title we used, and received a gracious and supportive reply. I told him it was like seeing the name Spiderman in my inbox and he wrote back, “Kate, it’s Spiderman.”