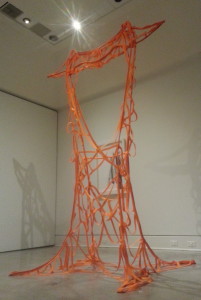 Melanie Colosimo’s Transmission Tower I, at the AGNS Terroir exhibition

One of the nice things about sabbatical is a little more time to enjoy my city and its attractions. I visited the new Art Gallery of Nova Scotia exhibition, Terroir, before the cottage week. Though I will need to return for a more fulsome look,  this open-call show of Nova Scotia art has a nice range of media and messages, each intended to connect to the local landscape and story. I saw some familiar artists, such as Steve Farmer‘s wonderful detailed photos of rust and abraded paint – what he calls “industrial documentation” – which I had previously seen at Pavia in Herring Cove, and one of John MacNab‘s mathematical machined wood sculptures. I also discovered some new artists, such as Wayne Boucher, whose large abstract Fall (2005) made me feel I was drowning in the work; when I later read that was an explicit aim I felt a little creeped out at its effectiveness. Finally, I enjoyed both pieces by Melanie Colosimo, whose air-mesh-constructed Transmission Tower I (2016) (see photo) is evidence of her artistic move:

…towards a preoccupation with traditionally masculine utilitarian imagery and themes of progress and construction … to explore memory, transitory states… thresholds between a previous state of being and the next phase.

This appealed to me based on some of my new thinking about energy transitions as the recycling of landscape from one use to another, something we probably need to get used to doing.

First Nation weighs in on Mactaquac