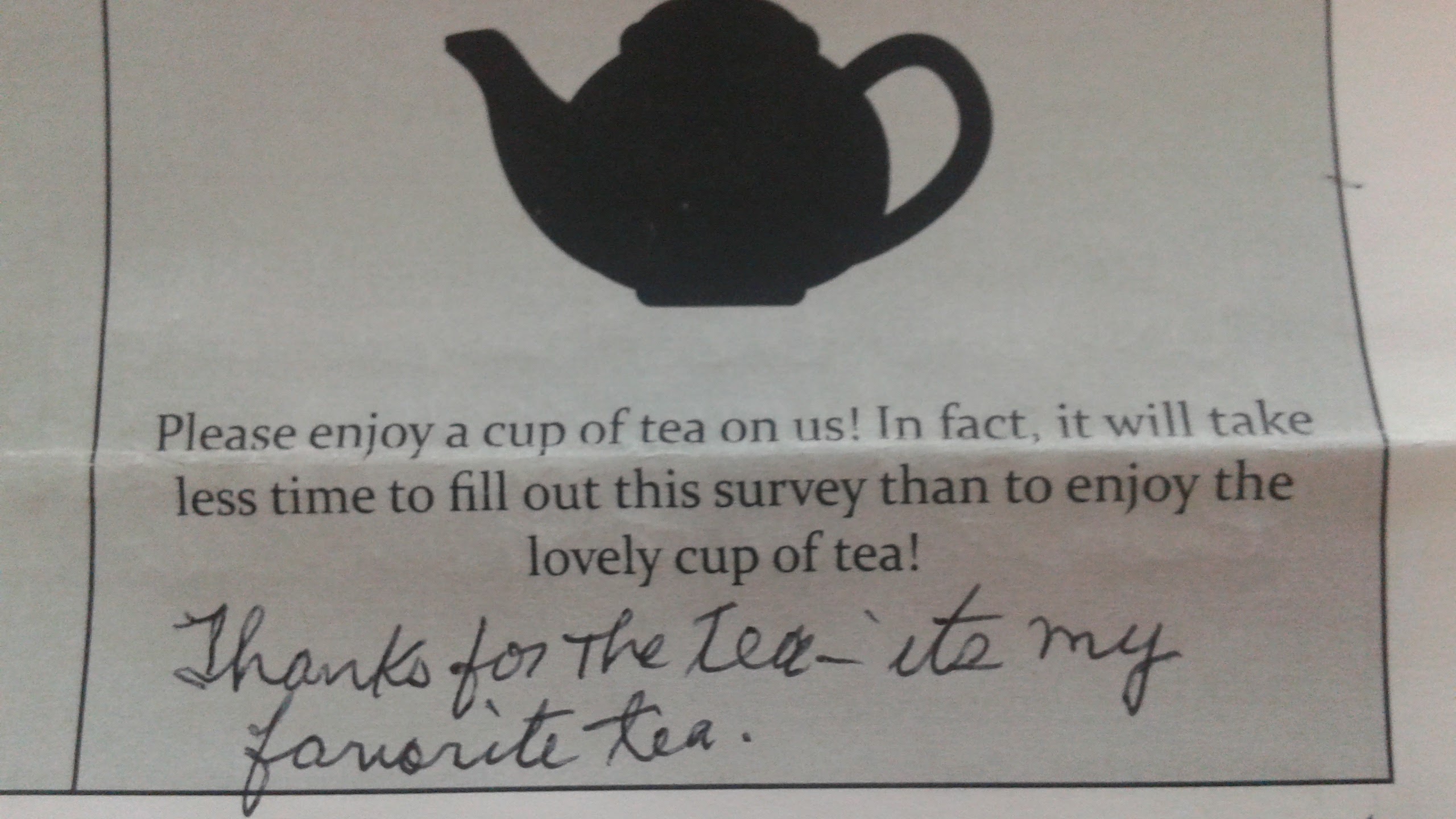 A sweet thank you note written on a returned landholder survey.

In my time doing interviews with farmers in Australia, Nova Scotia and the Falklands I have probably consumed a few hundred cups of tea.  Now I’m a coffee gal, generally, but it feels social to sit with a cuppa over an interview, and I like how it structures the interaction. There are clearer rules for having tea than there are for conducting interviews – particularly being the ‘subject’ of one. In fact, the protocols that do exist for interviews I don’t like, being too formal and seeming to frame the interviewer as the expert. When you accept a cup of tea, the farmer as host takes control of the proceedings, and as guest I become a grateful recipient of hospitality as well as their expertise.

Earlier this year, Simon and Mhari and I were brainstorming how to inspire a high response rate for a survey of a small farmer population (~n=225), that had to be a single mail-out for time reasons. Simon suggested including a teabag. So off we went. Boxes of English Breakfast were purchased and individually packaged envelopes included with each survey. We hoped farmers would come back from the barn after morning chores and do the short survey over a cuppa. Well, we’re just short of 12% completion rate so far, with only a trickle now coming in. Though we have had some sweet notes about the tea (see above), I think we can confidently say that tea is not enough of a incentive. Does this indicate a cultural change to coffee among farmers? Maybe a K-cup would have been a better idea. But it was worth a try. 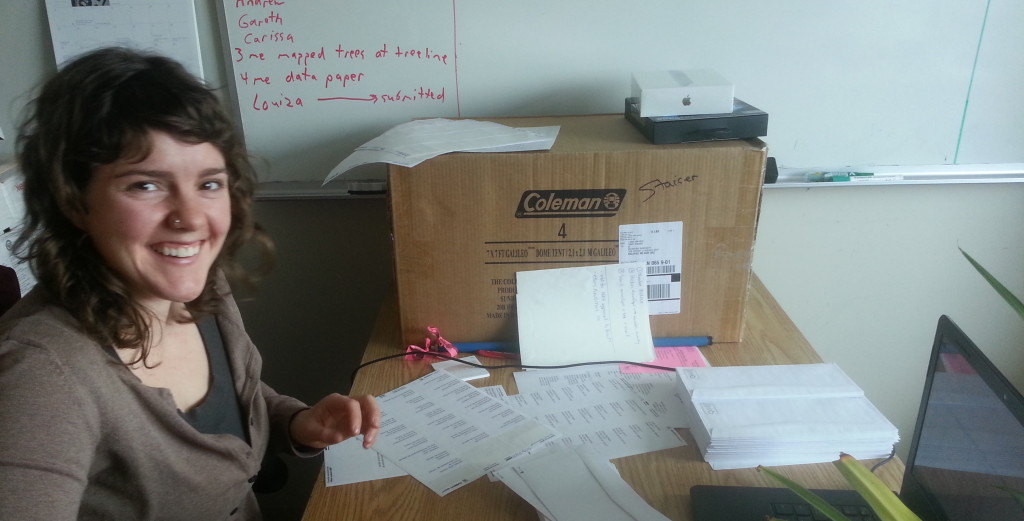 Great to see things have gotten moving towards our new Nova Scotia farmer survey. Today, lab team member Mhari (MREM 2016) started placing selected farmer addresses on the outgoing envelopes. These envelopes will be filled with copies of surveys when those are finally approved next week by the Nova Scotia Federation of Agriculture. This is the first time we will also be including a sort of incentive in the package: an individually wrapped teabag. We mean this as an indicator of how long the survey should take (i.e. steeping time), but also our hope that farmers treat themselves to a nice cuppa afterward. We’ll see how that plays out.

A lovely day in the Musquodoboit

I had a great day today at a workshop organized by the Nova Scotia Eastern Habitat Joint Venture folks, who administer the North American Waterfowl Management Plan activities in this region. Many of my existing collaborators on farm wetland and biodiversity issues across government and NGOs were present, to share our work and discuss common interests in the Musquodoboit River area. It was a beautifully sunny morning, on a warmer than average day, and so wonderful to get out of town and into the countryside. Great to be feeling a growing interest in social science within the conservation and agricultural science community.

Denise Herrera has just returned from ‘Camp’ (countryside) of the Falkland Islands, with data from thirty interviews with residents about what coastal areas they value and why. Denise is a research assistant for the cultural values mapping element of the Darwin Plus-funded Marine Spatial Planning project run by Dr Amelie Auge. I’m helping out on methods and interpretation. She’ll compile those locations and classifications into a map to include in the planning for marine conservation areas in the Falklands. Denise is now looking for participants in the main town of Stanley, and has advertised for participants via a full-page story on her work in the local weekly, Penguin News.

We are sitting well after our fourth Marginal Land Management survey mailout, with around 370 returned of the thousand sent. Above is a nice example of normal distribution in action, being the bump in responses by day after that last reminder. Today the final postcard is going out. Not all 370 were completed, as there is an option to tick ‘do not wish to participate’, but we do expect to meet our target of 33% completed by the time the final wave has passed. We are pleased, given the time of year when we have had to implement (the result of funding horizon), and the nice dry weather that has characterized it, meaning farmers have many demands on their time. Kudos to Simon Greenland-Smith for great management of this process.