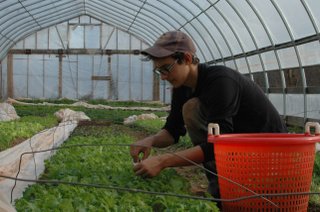 A picture of Bernard Soubry farming I found floating around the web.

Impressed by an editorial written for the Chronicle Herald by my PhD student Bernard Soubry, who has taken time from his final writing process to return to farm labour here in Nova Scotia. The editorial, COVID-19 shows what’s wrong with how Canada feeds itself, is a passionate and well-informed hit on Canada’s food system and dearth of adaptation plans. He writes:

But here’s a truth that researchers and rural communities have known for a long time: the food system in Canada doesn’t have a problem because of COVID-19. The food system is the problem.

On August 6, Bernard spoke to CBC Halifax’s Information Morning about his editorial; you can listen to that here.

We are in a spate of MES thesis defenses in SRES, including three I’m implicated in. Two of those were committee roles for me: Marion Davies, who ably defended her work on climate-motivated eating on Nov 25, and Jennifer Yakamovich who defends this coming Dec 9 (being held in the Dalhousie Art Gallery, aligning with her topic on art and environmental education). I am particularly thrilled to have seen my supervisee, Farzana Karim, strongly defend her thesis this last Tuesday. She tackled the issue of second homes and short-term rentals in the context of climate change, particularly in coastal settings, and used two distinct methods: municipal planning surveys and GIS analysis. What began as an idea nobody was talking about has finished as an issue that many are talking about. So this is great timing to send this work out into the world. Congratulations, all.

Are we taking farmers seriously?

Discourse about ‘farmer’s perceptions’ by region – Figure 1 of ‘Are we taking farmers seriously?’, Soubry et al. in press.

Short answer: No. The first paper is out from Bernard Soubry’s Oxford PhD (which I’m co-supervising), and it is a systematic literature review in Journal of Rural Studies of research on farmer perceptions of climate change, 2007-2018. Very interesting patterns emerged from the 105 papers reviewed, including that the work is dominated by those seeking to ‘test’ farmer perceptions of climate change, rather than leverage them, and that the work is largely done in the Global South. Bernard describes this work as largely seeing farmers as ‘vulnerable’ or ‘verifiable’ rather than viably adapting, and tracks some of the colonial undertones at play. Congratulations, Bernard.

Nice to hear my co-supervised PhD student Bernard Soubry on CBC Halifax’s Information Morning today, talking about what the new IPCC report on Land Use and Climate Change means for farming in Nova Scotia. He drew on his interviews with farmers and other food system experts across the Maritimes over the past few years. The clip is here.

Last summer I led the writing of a case study on an innovative coastal adaptation project underway in Truro, Nova Scotia, a place plagued by flooding for decades. A confluence of provincial department interests enabled collaboration on a dyke realignment and salt marsh restoration project in the absence of overarching climate adaptation or coastal protection policy. That case study was Canada’s contribution to an OECD report (featuring case studies also from New Zealand, Germany and the United Kingdom). That report , “Responding to Rising Seas: OECD Country Approaches to Tackling Coastal Risk“, was released this week with a webinar from Paris (slides here). I was proud that OECD’s Lisa Danielson, who also joined us in Halifax for our workshop on the case study last November, highlighted the Truro case during the session. The report features some excellent synthesis of learnings from the four case studies, as well as some novel analysis on cost-benefit ratios for adaptation action for the world’s coasts: sadly rural areas aren’t going to pay for themselves this way, so novel finance options will be needed.