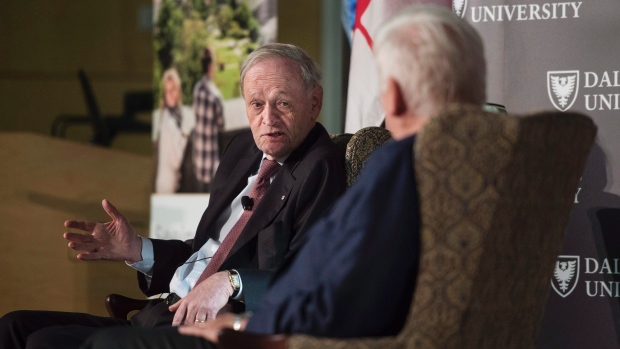 I’ve accepted a role on the Research Committee for the new non-partisan MacEachen Institute for Public Policy and Governance at Dalhousie. The event launch was Monday, with a discussion panel about the four research priority areas followed by a little chat by two political heavy hitters, Jean Chretien and Bob Rae, about the Institute’s namesake, Allan J. MacEachen. Disappointing that Gerald Butts had to cancel, not least given his years at the helm of WWF Canada.  My most significant contribution to date has been the appreciative framing of the research area ‘Atlantic Canada and the World’:

The Institute will foster new academic research and public dialogue on issues where Atlantic Canada can lead: regional immigration and patterns of out-migration; trade-offs in transitions from non-renewable to renewable energy; … coastal development and climate adaptation; management of natural and marine resources; relations between Indigenous peoples and government agencies…

This sees the challenges of Atlantic Canada as areas we can contribute, turning our vulnerabilities to strengths. The launch was a well-attended event, a veritable sea of suits. As a member of the committee I had the honour of sitting… well, with the other several hundred who RSVPed actually. Which is about as close to the inner circle as I felt when I read later in the day about where the Institute money originated. My inattention to such details notwithstanding, it will be good to be a part of more policy-relevant work.