This research started with a national collaborative study concerned with the social aspects of energy transitions, specifically how values, perceptions and knowledge among citizens drive their preferences and decision-making. Funded by a SSHRC Insight Grant to John Parkins (PI) at the University of Alberta, Mactaquac, NB, was a case study area. In Mactaquac a decision was due in 2016 about whether the hydroelectric dam will be decommissioned, removed or rebuilt. My particular interest in that project was around hydroelectric landscapes, but I was also peripherally involved in the Q-method, NB citizen jury  and national survey elements discussed on this other page. On the basis of our work I made recommendations to NB Power about the Mactaquac decision process.

In 2013 we took residents of the Mactaquac Dam headpond on houseboat tours to elicit and discuss their feelings for the place and its future (Sherren et al., 2016b). Despite the trauma of the dam’s construction in the late 1960s, most would prefer it remain, for the landscape and lifestyle amenities. A short documentary, Mactaquac Revisited (see sidebar) was filmed on-board. We returned in 2014 to do land-based interviews to test how landscape norms and preferences are set in human-modified landscapes (Keilty et al. 2016). We also reconstructed the former landscape using old aerial photographs, shared via an ArcGIS online storymap, Before the Mactaquac Dam (see sidebar, and Holman 2016). Finally, we  dug into the New Brunswick survey oversample of our national energy survey to understand provincial perspectives on energy, particularly the Mactaquac decision (Sherren et al. 2016a, Sherren et al. 2017).

Big Data methods were also employed. We monitored text-based social media around Mactaquac and Site C to understand the way that text and image-based social media is used (Chen 2015).  We mined a year of image-based social media (Instagram) to glean better understanding of how so-called Millenials use and what they value about the  landscape in Mactaquac and around the now-approved Site C dam near Fort St. John, BC (Chen et al, 2018, Chen et al. 2019).  The Big Data work inspired a new SSHRC grant, led by Dal colleage Mike Smit, to explore the use of artificial intelligence in such culturomics research, especially that aligned with social impact assessments; in this new work, hydroelectricity is again the case study.

Holman, L. 2016. Does this dam have a future? Taking a closer look at the Mactaquac Dam. NiCHE website blog contribution.

Yan Chen’s MES (2016) was co-funded by SSHRC and the Nova Scotia Research and Innovation Graduate Scholarship, worked on social media monitoring and analysis of Instagram images around hydroelectric sites at Mactaquac and Site C. Her MES thesis is available online. She has now returned to undertake a PhD on the Smit-led project using machine learning to explore image-based data to inform SIA tools.

Kristina Keilty (MES 2015) worked as a research assistant on the Mactaquac houseboat tours, including transcription and preliminary analysis of those data, and undertook additional land-based interviews for her MES. She went from SRES to working as a energy conservation advocate at the Summerhill Group in Ontario.

Simon Greenland-Smith  (MES 2013), did statistical analysis of the 2014 New Brunswick survey oversample, which includes Mactaquac-specific questions, as a short contract.

Larissa Holman (MREM 2014) did the storymap and hydrology literature research as a summer internship and fall project. The storymap was awarded ESRI Canada’s App of the Month for October 2017. Her first job after leaving SRES was working for the Ecology Action Centre on the daylighting of a section of the Sawmill River, Dartmouth, NS.

‘Before the Mactaquac Dam’ storymap 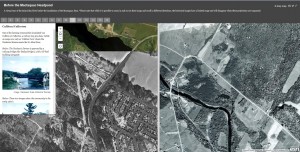