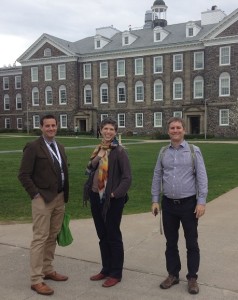 I spent yesterday at the 2016 meeting of the Canadian Colleges and Universities Environmental Network. It was a great opportunity to meet leaders from other environmental programs, near and far. Despite the increasingly crowded space (read: educational market) in which we operate, the collegiality was powerful. Great talks by Dal’s own Tarah Wright and Ingrid Leman Stefanovic, Dean of SFU’s Faculty of Environment,  placed our collective undertaking in rich context, and Megan Leslie brought insight on political life to an excellent panel on Science Communication. Drinks in the Steele Ocean Building were generously provisioned, and I took the opportunity to sneak into my old dorm room (#213 Old Eddy) during the dinner in Shirreff Hall: 25 years later and it still smells the same.  Thanks to the organizers Peter Mushkat (Dalhousie) and Don Jardine (NSCC) for providing an atmosphere conducive to much productive networking.