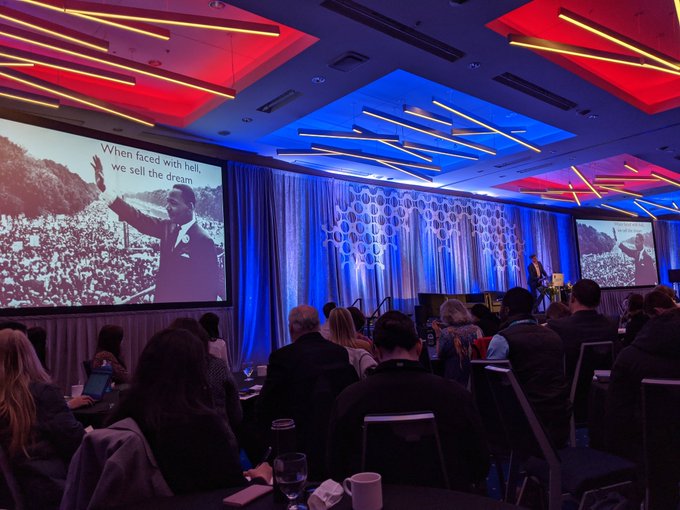 Per Espen Stoknes opening Adaptation Canada, suggesting we “sell the dream” of CC

The flight to Vancouver last week felt worth it, given the stimulation and networking offered by Adaptation Canada, the largest CC conference in the country at 700+ attendees. The mix was dominated by practitioners, governments, NGOs, and First Nations, with an appropriate minimum of academics. The keynotes were a great mix, starting with Per Espen Stoknes on the psychology of climate change communication, and ending with the inspirational Sheila Watt Cloutier (yep, bought the book) on the human face of arctic warming. I pushed back on Stoknes a bit during the questions in relation to his argument that we must not talk to people about sacrifice; I think that it may be a muscle we’ll lose if we don’t. Many interesting sessions in-between,  including sessions on adaptation in small towns, adaptation in Metro Vancouver (Amir Taleghani, “Adaptations aren’t like Pokemon; you don’t just choose one and deploy it”), the new ClimateData service hubs, art engagement and gender implications.

I was very proud of the session I was in, led by NRCan’s Pamela Kertland and John Sommerville (MREM alum!), called “Should I stay or should I go? Navigating buyouts, relocation and reinvestment for flood mitigation and disaster risk reduction”. I spoke about insights from focus groups with NS coastal residents last summer about nature-based coastal adaptation and retreat, and municipal planners from Grand Forks and Calgary each talked about how they handle the issue in relation to inland flooding events. It was well attended and the audience engaged enthusiastically with the offerings.

The youth observers were memorable, the co-chairs were talented, and the whole undertaking very professional, from the outstanding plant-based catering, to the entertainment (Dakota Bear!) to the great IT support in each room. Kudos to the Fraser Basin Council and the Sheraton Wall Centre for a great few days. The weather was utterly gracious – to go coatless for a few days was a real boon. I was also happy to leverage the trip to chat with colleagues I don’t see often, like Stephen Sheppard (UBC) and Maureen Reed (Saskatchewan), and visit the Australian Embassy for yet another passport renewal.

A stunning clear crossing of the Rockies enroute to Adaptation Canada.

I’ve broken my flight strike to head to Vancouver for the Adaptation Canada meeting, and if you’re going to expend the carbon, at least have a window seat and a clear day. Candy to a geographer. The transect across from Edmonton on the last leg was fascinating, from fields and shelterbelts and intermittent riparian buffers, to oil and gas pump sites cut out of forests, to forestry cutblocks and then into the Rockies proper. On descent towards Vancouver an amazing panorama opened up of the Fraser Valley and its mix of agriculture and industry and development. Vancouver’s new train in from the airport was a real boon, as was not having to put on my parka, hat or mitts, brought just in case. You could easily identify the visitors on the streets: smiling and coatless among the bundled locals.

There is just something about a beach in winter.

Nice to see the advertisement out over the Listservs for the winter session of talks and symposia at the Nature-Culture-Sustainability Graduate program of the Rhode Island School of Design (RISD). I will be appearing with UMinnesota’s Simi Kang for A Conversation about People and Landscapes on April 22nd, Earth Day. This is one of those slow burn invitations. I met the Program Director, Jonathan Highfield, at a conference in Honolulu back in the mid-2000s when I was doing my PhD. Lesson: you never know where a good sushi meal will lead.

REVISED MARCH 4th: My attendance has been cancelled on account of concern around Covid-19 and suggestions to reduce non-essential travel. Hopefully we’ll be able to do it another time.

I had forgotten about my interview with local journalist Moira Donovan until an email from a colleague alerted me that the documentary she produced for CBC’s Atlantic Voice aired this morning. The short (26 minute) documentary is called Breaching Tradition, and does a nice job of telling the story of the challenges facing Bay of Fundy dykelands. Collaborators Danika van Proosdij (SMU) and Tony Bowron (CBWES) are featured as well, and several residents of areas like Nappan and Advocate Harbour whose communities and livelihoods are threatened. Donovan also put together a CBC news article by the same name: Breaching tradition: Salt marshes replacing Nova Scotia’s dikes. This is the setting and challenging management context for the case study I am co-leading in a new 5-year national NSERC project called ResNet.