Today and tomorrow, Simon Greenland-Smith is in Cape Breton for the 52nd meeting of the Atlantic Society of Fish and Wildlife Biologists. He is talking about the Marginal Land survey, which is currently winding up with a ~37% response rate, remarkable for a summer/fall survey of farmers and above our goal of 33%. In the past few years, I or individuals from my lab have comprised the only social science contributions to this event, but this year I note a presentation about a Bird Studies Canada survey on farmer perceptions of aerial insectivores. Many other presentations relate to the Big Meadow Bog restoration project at Brier Island, and its various elements.

The Silvo-Pastoral World Congress is happening next September in Evora, Portugal.

I am co-convening a session at next year’s World Congress on Silvo-Pastoral Systems. I love interdisciplinary problem-based conferences like this one, which is focussed on “systems which combine trees with animal grazing, in combination with crops, in regions of the world with two seasons, one dry and one wet, and thus drought as a limiting factor”. My Australian work on scattered trees fits in here, but also new work on holistic management.  I am co-convening a theme on ‘large scale trends: assessing and mapping at the regional and global scale‘ with Guillermo Martinez-Pastur from Argentina, but there are many other themes, including on socio-economics. We are looking for a diversity of landscapes to be represented. Abstracts are closing November 30th. Please pass this on to anyone you think may be interested. 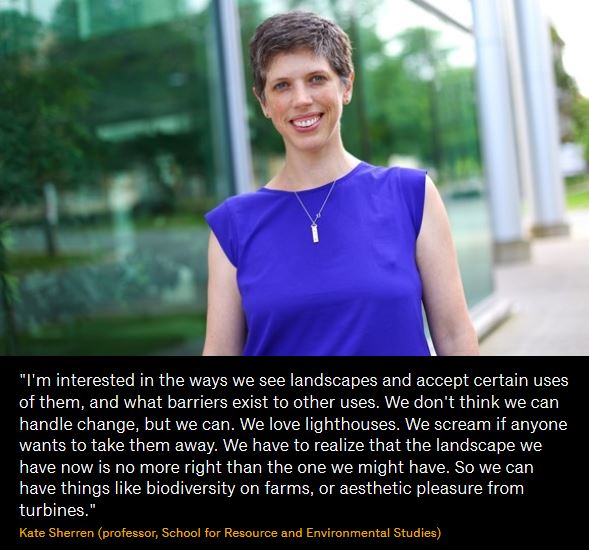 A familiar Faculty of Management face in this week’s Know Your Dal campaign.

Denise Herrera has just returned from ‘Camp’ (countryside) of the Falkland Islands, with data from thirty interviews with residents about what coastal areas they value and why. Denise is a research assistant for the cultural values mapping element of the Darwin Plus-funded Marine Spatial Planning project run by Dr Amelie Auge. I’m helping out on methods and interpretation. She’ll compile those locations and classifications into a map to include in the planning for marine conservation areas in the Falklands. Denise is now looking for participants in the main town of Stanley, and has advertised for participants via a full-page story on her work in the local weekly, Penguin News.

As CTV put it, “it’s the generation decision of a generation.” This week and next, there are five public sessions being held about the Mactaquac decision, in the region of the headpond. Information stations are manned by NB Power officials and a small army of young people hired to engage with attendees. Some of this information provision is two-way, with butcher’s paper available for people to record their concerns or values. I am still waiting to hear how such data, and that collected through their online survey , will be analyzed, reported upon and considered in the final decision.